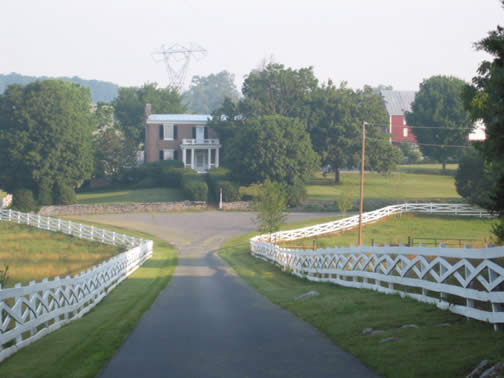 The current brick structure (the first building was a log house located just west of the current brick house) was constructed in 1860.  It was named for an onyx quarry to the west of the house and for the ford at Long Glade Creek to the east. The house is of Georgian design using the flemish bond style.  The house has a fire place in each room.  The bricks for the house were fired on the site using clay from the farm which is well-adapted to brick making, as it molds easily and burns hard at low temperatures.  The boxwood in the yard dates back to the time the house was built.

There is no date available as to the time that the bank barn was constructed but it is known to be much older than the house.  It is built of hand hewn, virgin pine logs.  The stable doors had an iron bar and a huge lock used to protect the horses during the Civil War. According to legend the barn was spared during the burning of the valley at the time of the Civil War because the horses could not be removed since the lock and bar were so stout.  To torch the barn would have been certain death to the horses. The huge iron bar and lock and key that was used to lock the stable doors so that the horses could not be driven out remain in the family.

Deposits of onyx have been found near Bridgewater.  These onyx deposits in the basin are not surprising since Caverns and thermal springs are common there. These onyx deposits on the farm were actively mined by a consortium of New York business men, but found to be of inferior quality for ornamental purposes.  However, the material was mined for tomb stones for some years. Samples of this material have been retained by the Miller family.

To the left of the entrance to the farm on the Warm Springs Turnpike was a mill on Long Glade Creek which, according to Dr. John W. Wayland, a local historian, was used by the Millers many years ago for working marble.  The mill wheel is still on that site.  Lewis D. Miller, who lived here some years, said that bones were also ground at this same mill for making fertilizer. 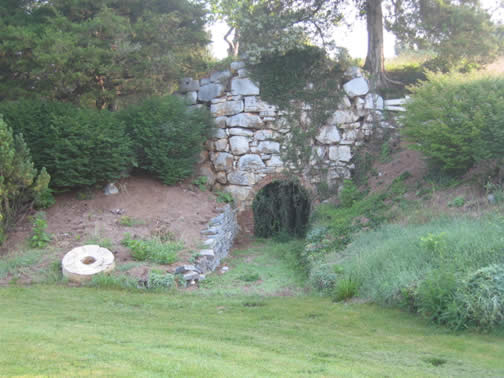 To the right of the entrance is a lime kiln.  A primitive method of securing industrial lime for farm use.  A huge chimney type was erected of lime stone rocks on the farm. Layers of lime rocks and logs were placed in alternate layers to the top of the chimney and were capped on the top with wet clay mud. The fire was started at the bottom and smoldered for about a week at which time the powdered lime fell to the bottom and was collected from a small opening at the bottom and was hauled into the fields for fertilizer.

This land was a part of the original farm bought by Christian Miller from the Irvines in 1837.  Successor owners have been John C. Miller, William Miller, Lewis D. Miller, Garland F. Miller and Nathan H. Miller.